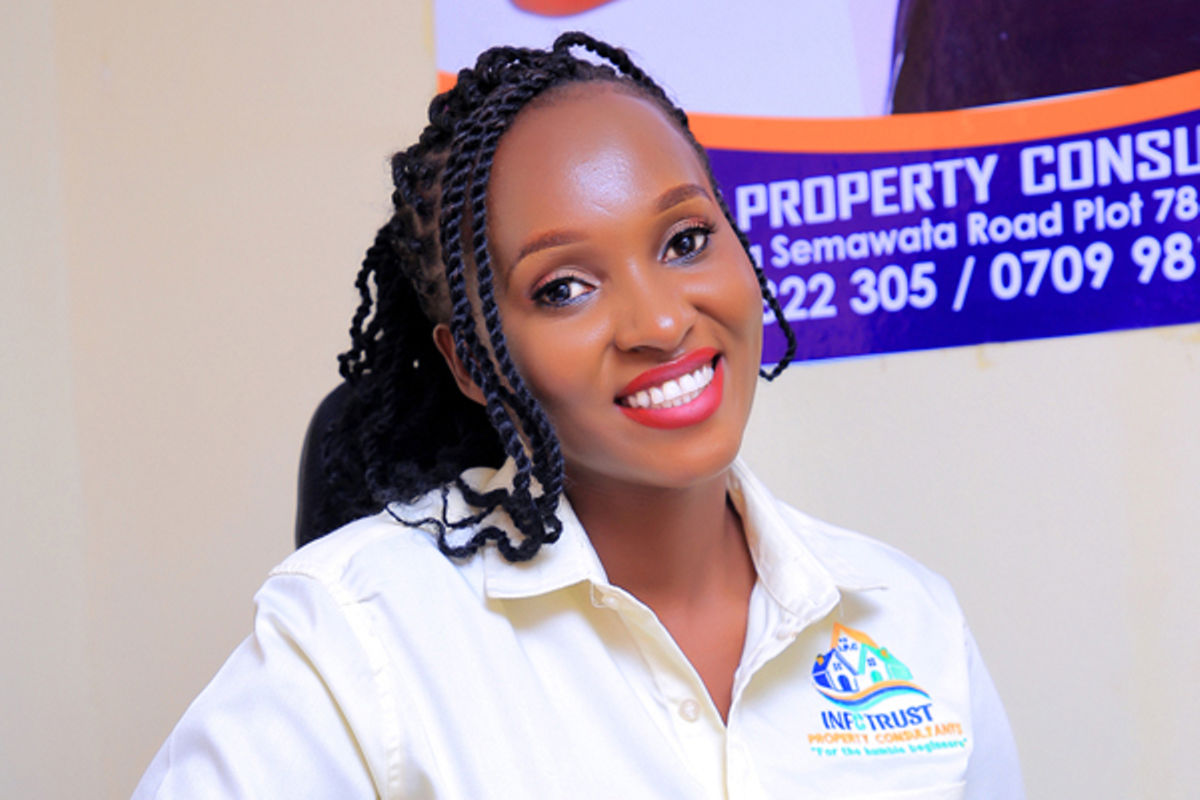 How Mariam Tusubira fell into real estate at 19

Miriam Tarinyeba Tusubira, owner of Infotrust Property Consultants, is one of the women thriving in Uganda’s male-dominated property sector. Tusubira was born and lived in Masaka until she was 13 when she moved to Kampala to live with her older sister.

“I was very curious and wanted to learn everything. I remember during my seventh primary vacation, I learned to weave mats and used my fourth and sixth vacation to study information technology at Makerere University,” says Tusubira.

For her internship, adventurer Tusubira secured an internship at the Penthouse Hotel in Moyo district, near the South Sudanese border. However, in a short time, she went from being an IT technician to being a sales manager. His customer service prowess earned him so much money that by the end of his internship, Tusubira had saved 9 million shillings.

Not knowing what to do with her savings, she sought advice from her family, who encouraged her to start a business. She invested Shs2m in a retail store and used the rest to buy a 100X100ft land in Sonde.

“Whenever I made a profit in my business, I invested the money in acquiring more land. At first, I asked land brokers to buy some properties, but they discouraged me. Later, I discovered that their advice was only based on me being a woman, so I stopped asking and started buying on my intuition and it paid off,” says Tusubira.

During her foray into real estate acquisition, she befriended a real estate lawyer who taught her more about the business.

Where she had invested blindly, Tusubira started making calculated moves and even stepped out of her comfort zone and started investing in mailo lands, freehold tenures and leaseholds she had previously been wary of. His land had begun to rise in value; the land she bought five years ago now cost almost double what she paid for.

“There was a time when I lost hope in education in Uganda and thought about moving to Canada so that my children would get a quality education. To finance the move, I sold one of my precious plots of land and bought an acre of mailo land, and two of Kabaka’s land and used the rest to invest in our move. The land I bought from Shs8m was worth Shs280m seven years later,” says Tusubira.

This kind of profit confirmed to her how lucrative the real estate industry is, so she decided to pursue it full time.

“I started buying more mailo land. I would buy one piece at Shs30m, put up some developments and then subdivide it into plots, which would make me around Shs70m,” says Tusubira.

However, as she continued to meet and work with more people, she began to notice malfeasance in the business.

“Many developers were too greedy to give their clients the size of land they were entitled to, even though they would still have made enough profit without cheating,” explains the real estate investor.

Tusubira felt the need to change the way business was done in the industry, so she started a business that would give people the information they needed about property.

And so Infotrust Property Consultants was born. The company helps its clients to research the properties they are interested in around the world.

With her background in IT, Tusubira has found it easy to merge technology and real estate to create a better property buying experience for her clients.

“I realized that if you want to retire comfortably early, invest in real estate. And I wanted to do that for everyone by taking the fear and mystery out of real estate. I’m happy to say that I I managed to do this by making the right information available to customers,” says Tusubira.

Not only does the company provide information, but it also buys and sells land, develops properties for clients, conducts surveys, handles letters of administration, land transfers and helps clients recover their land titles or to deal with special titles for those who have lost theirs.

Even with the obvious experience Tusubira has in real estate, she says she still struggles to convince clients to trust her with their money because she’s a woman playing in a man’s world.

“But now I’m making inroads in the industry by giving every customer the best possible experience so they end up becoming our ambassadors,” she notes.

Getting genuine land is a hassle and there are plenty of scammers out there waiting to take advantage of unsuspecting customers. But the property investor says she can now tell which land is problematic and stay away, no matter how lucrative the deal may seem.

“Although I was able to and the family wanted to, there is a piece of land that I had to leave because I could tell that was all they had to survive and they sold out of desperation. I believe that making a profit shouldn’t blind one to the suffering of others,” she says.

Real estate companies should research the land they intend to purchase for a peaceful settlement of their clients. This will remove people’s fear of buying land.

Do the right thing. Give people value for their money by giving them the right dimensions of their land.

We should be able to build a six-bedroom house with a small garden on a plot of 50X100.

You will earn more profit and a good reputation when you have a satisfied customer.

Keep track of your staff because a lot is going to happen right under your nose. Follow up with your customers to see if they were treated well. Take the time and check them out. I have booked a day where I check on my clients to see if they have been well served.

When you buy a piece of land, mark it out, no matter how small.

Know the purpose of your land so you get the right spots with the right facilities.

You have the right to know everything about your land. It is also important to make a well-informed decision about the land you wish to purchase.

Have different opinions about your titles from your company, the government, or even a personal attorney.

Trust that there are real companies out there to help you invest in real estate.

The mailoland tenure system is one where land is registered and owned in perpetuity, with the holder having title to it. This land tenure system in Uganda is based on the allotment of land in accordance with the Uganda Agreement of 1900, subject to legislative restrictions. Land in Uganda held under the Mailo regime is mostly confined to the central region of Uganda.

The mailo tenure system recognizes occupation by tenants (locally known as Bibanja holders), whose relations with their lords or landowners are governed and guided by the provisions of the land law. Mailo land, like freehold, is registered under the Registry of Titles Act.

All transactions must therefore be recorded in a register guaranteed by the State. Under this regime, the holder of a mailo land title has absolute ownership of that land.

● I have employed up to 20 people and satisfied customers keep me going with their uplifting comments.

● In about two years, I will have installed a number of people in the various areas in which I have invested as one of the largest real estate brokers in Uganda.

● I plan to train many people in what I do and look forward to employing more people or helping them start their own businesses.

● My daughter loves charity work. She asked me to buy her land so we could build houses for single mothers in need as they gain ground. This is a project that I started.

Australia’s best-selling homes – and where to find them

Build a strong relationship with the local community